This is a short post but a genuinely serious one.  About 5 minutes ago I log on to Facebook to see pictures of a demonstration against the bedroom tax today in Wirral.

Not a large demonstration and a peaceful one yet a police officer decided that a t-shirt worn by one of the protestors was somehow offensive.

Here is that t-shirt: 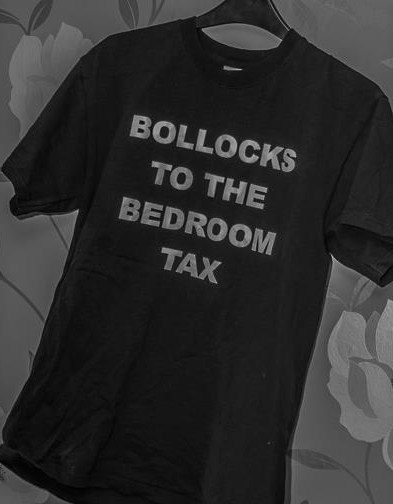 I was not on the demo but I have the same t-shirt which was given to me over a year ago when I spoke to a grassroots anti bedroom tax group in Wirral and I am proud to have one and I like it and thought…yes it was the dog’s bollocks when I first saw it but (genuinely) I shrank it in the wash so yes I really bollocksed up that simple task didn’t I?

I wonder if McVey, yes Wirral is her constituency, had worn a t-shirt with the Spare Room Subsidy is the dog’s bollocks on it would they have had the same response from the police? Ok enough of that reader I don’t want to put imagery of dog’s bollocks on McVey’s chest …

So what is offensive about the word bollocks?  Yes that’s a serious question. If the t-shirt merely said “bollocks” on it would a police officer or a member of the general public think it offensive?  I doubt it as how many t-shirts do we see with I’m with this fucking idiot written on them with a large finger pointing left or right below such wording?

Surely the word fuck is far more offensive than the word bollocks?

The context here was this was a march to the council offices to hand in appeals on behalf of vulnerable people who have been shafted by the pernicious bedroom tax and the exact same has been done many times before to Wirral Council and with many others wearing the exact same t-shirt.

I have been on a few marches wearing my bollocks to the bedroom tax t-shirt in the past and will continue to do so.  I may decide to wear a Frack Off t-shirt or may choose to wear one with a picture of the the 45 rpm single (yes explain that to your children dear reader!) The W*nkers Song by Ivor Biggun and the Red Nosed Burglars should I see fit.  Are we not allowed to protest any more?  Note well I loved the Clash in my youth and did have a White Riot t-shirt though God forbid what would happen if I wore it on a march! In my youth I rightly thought the Sex Pistols were crap so I never had a Never Mind the Bollocks t-shirt.

A 2 minute google search reveals that bollocks was first used in the Wycliffe bible of 1382 just a mere 632 years ago and just for good measure there was a case taken against the Sex Pistols in 1977 a mere 37 years ago that the Never Mind the Bollocks album cover was obscene – the case was lost and it was ruled not to be obscene.  In fact to those of a certain age John Lydon advertising butter on TV is frankly more obscene

In the end the lady wearing the t-shirt was ordered to cover it up else be arrested by the police officer and she was kindly given a hi-vis jacket by a friend to wear. 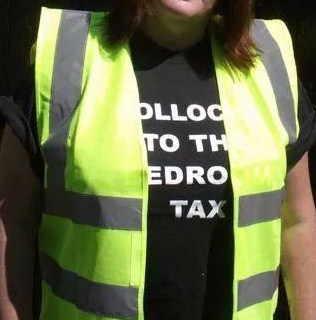 So apparently glow in the dark goolies to the bedroom tax is acceptable!

5 thoughts on “Gonads to the spare room subsidy? The lady doth protest too much?”