No job?  Then you will not get a council house in Slough as the Labour Party controlled council there last week decided.  Where will vulnerable people live?

An article in the Slough Observer focused on council housing rents doubling which is bad enough obviously, yet what they missed is that in Slough this means no job no council house. 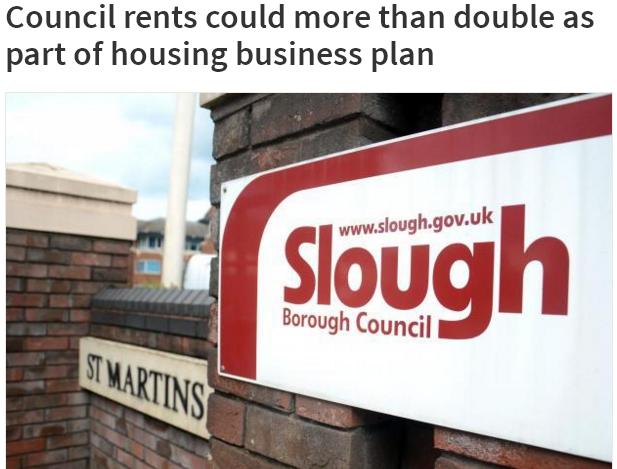 It is NOT the increase itself, it is what it means in simple terms.

A family can receive £20,000 per year under the new reduced benefit cap which is £1,666.66 per calendar month in the maximum benefit allowed.

I need not continue with any more figures and simply say that no benefit household can afford any of these so-called affordable (sic) new council houses that a LABOUR council has decided ONLY to offer.

In short the household who is unable to work or not expected to work cannot afford a council house in Labour controlled Slough.

By not expected to work I mean the 64% (!!!) of existing capped households who have children of pre-school age.

Note that just 14.5% of existing benefit capped households claim Job Seekers Allowance and are merely unfortunate in being unemployed – and so there are many more unable to and not expected to work households who are capped than those on the dole!

I wonder what John Healey the newly appointed Labour Party Shadow Housing Minister (and darling of the social housing commentariat) makes of his colleagues saying if you want a council house then get a job you lazy bastard – which is precisely what the Labour run council in Slough has decided!!

This is nothing less than the Labour Party abandoning the social housing model that was one of the five pillars of the 1948 Welfare State to slay the giant of squalor.

This is the same old right wing Labour Party policy of Rachel Reeves who infamously said that Labour is about working people not those who do not work and was Labours Shadow DWP minister at the last election when they supported the overall benefit cap reducing (page 47 of the manifesto if you’re interested.)

Fuck you sick, ill, infirm, disabled, single parent, etc is still clearly Labour Party policy when it comes to putting a roof over the head of society’s most vulnerable!