The above is the letter or a screenshot of it from the BBC North West Tonight article that you can watch here – 40 seconds of misery – and a cut of £70.63 per week to his housing benefit which is £306.90 per calendar month.

Could you find £306.90 per month to pay your mortgage in order to keep a roof over your head and that of your children?  This is what “John” will have to do – an do from his subsistence level social security benefits!

Get a job says the government.  You only have to work 16 hours per week to qualify for working tax credit and thus be exempt from the benefit cap.  That’s correct.

Those figures above are from a benefit calculator and one of any available online and that is the situation if “John” had to pay child care costs of £300 per week – which for 4 children at 16 hours each ain’t going to happen – and for which “John” would get back £210 per week – or a net cost of £90 per week which is rather a lot out of wages of £115.20 per week!

If “John” did not need child care he would be much better off as he would only lose £12.74 per week in overall benefit and with his wage of £115.20 per week that leaves him £102.46 per week better off in overall terms.

So “John” the government position is work for £1.49 per hour or the kids lose the roof over their heads!  What a nice caring government we have!!

“John” leave the kids at home and don’t have any childcare costs and you will be £102.46 per week better off for working 16 hours (less any travel to or other work costs) and have a roof over the kids head.

So four days at four hours work becomes four days at 7 hours child care for four children which is 112 hours of childcare per week! 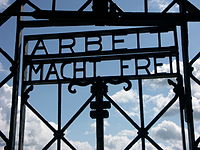 If you do watch the 40 second video please make sure after reading the facts above that you read the really really caring comments underneath the video!!

It seems those who guarded the place where they passed the Arbeit Macht Frei sign every day are now all living in the North West!!