We see the full roll-out of Universal Credit including to pensioners as one example, the full roll out of the LHA Maxima Cap policy which also affects and make housing benefit cuts to pensioners in general needs housing including some who are not under occupying … and then a further five years of the bedroom tax and overall benefit cap too, will all take place in the next parliament. Yet not even the supply of housing, the housing crisis of build build build at all costs is being discussed in the Tories self-styled Brexit-only election.

What has had little if any attention is the huge rates of child poverty in social housing, poverty which will only get worse with the overall benefit cap which directly targets children and all of the other housing benefit cuts that we now know about and due to begin before March 2023.

Even assuming no more announced or new cuts to housing benefit entitlement (and I predict a further cut in the overall benefit cap level if the Tories are re-elected) the benefit freeze, tax credit cuts and rising inflation will mean that social tenants especially those will children will see child poverty in social housing increase much further.

The benefit cap will also see many of the 385,000 prospective social tenants each year and that’s just England be refused social housing due to affordability and go direct to the homeless queue and homeless provision too and place even more children in poverty.

Child poverty in social housing is far too high already as this chart reveals. 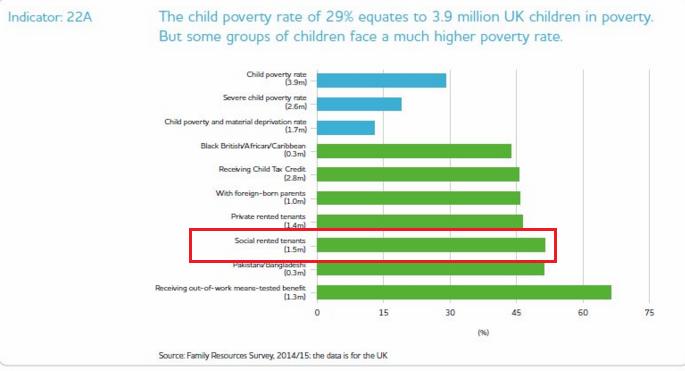 This chart was released last week by the Resolution Foundation and perversely it chose to comment that child poverty was high in the private rented sector.  Yet this Family Resource Survey chart from 2014/15 and note well before the most recent benefit cap cut reveals that the social rented sector has more children in poverty at 1.5 million than the PRS with 1. 4 million and there are more PRS properties than SRS properties which means a much higher proportion of children in poverty live in social housing.

There is 20% more child poverty in social housing than in private rented housing and that figure is rising.

What a startling statistic that is and one that has gone very much under the radar of social landlords for years.  It is a huge financial problem for social landlords in terms of rent affordability that their finance directors should sit bolt upright and take notice of especially in light of the overall benefit cap policy and make them rethink what they are doing now which is largely ineffective and ill-considered.

Does this mean the many many millions social landlords spend each year on education, employment and training (EET) activities is wasteful as it can only help 1 in 7 tenants?

Have social landlords simply adopted the work is the best route out of poverty mantra of IDS and (wrongly) believe this is the best way to help their ‘customers?’

Poverty whether child or adult affects the affordability of rent  – and irrespective of the social purpose debate within social housing – it is in landlords best financial interests to ensure rents are affordable.  Many social landlords only offer EET services and few if any offer welfare benefit advice and support of note a term I will clarify shortly.

Many social landlords do offer self-titled welfare benefit ‘maximisation’ services which are merely very low-level services (of no note or consequence) which helps explains why some £90 million per day, a massive £33 billion per year of welfare (tax credits and social security benefit) the government admit is entitled to yet goes unclaimed. By definition these low-level services cannot be a maximisation service!

The removal of most legal aid for welfare benefits, general austerity, the closures and underfunding of welfare rights organisations and the ones who have survived moving into low level services such as debt advice rather than claiming or appealing social security benefits, there is a hugely increased demand for social tenants getting what they are entitled to in ‘welfare’ and social landlords need to massively up their game in this area and for landlords bottom lines too.

All of which means for council and housing association landlords that a great many more social tenants are going to get into arrears and the real crisis of affordability really begins after this election.  It also means social landlords have no choice but to ramp up their benefit maximisation activities significantly as much for their own bottom lines as for tenants.

The admittedly very crude picture is do social landlords ramp up their welfare benefit services at their cost as if they do not they face many more customers with a landlord eviction cost of typically (in the regions)  £3,000 plus the rent arrears level.  The alternative is (a) evict many more households with children and after 2019 pensioner household too, both groups are politically and reputationally sensitive and / or  (b) refuse to take new tenants on benefit.

In short the social purpose debate going on within housing that has been till now largely theoretical will become very practical indeed and these two polarities will very soon have day-to-day operational consequences.

Do social landlords and specifically housing associations support tenants or do they take the position of pay the rent or bugger off?

That is the reality of social housing provision after this election and if it is the latter then the social housing model created in the 1948 Welfare State is dead before the end of the next parliament.

The silence within housing over all the above is deafening