YMCA England will see their housing benefit funding reduce by over £40 million per year under the LHA maxima policy of the Conservatives government.

The government says housing benefit cut by the policy will be mitigated by giving local councils £35 million per year in Discretionary Housing Payments (DHP), yet that is not enough to cover the housing benefit cut to just one provider in  YMCA England!  So…

No social rented sector tenant can receive more in housing benefit than the maximum LHA rate. LHA is Local Housing Allowance which is the private rented variant of Housing Benefit and is set at a fixed rate in 152 localised areas called Broad Market Rental Areas.

“YMCA is the largest provider of safe, supported accommodation for young people in England, providing almost 10,000 beds every night.“

Two nights ago I looked at YMCA England’s website which contains the housing benefit costs for each YMCA and the age groups which is relevant as the under 35s get a lower rate of LHA called the SAR – shared accommodation rate.

What I found for the first 6 YMCA’s alphabetically was as follows:

Each YMCA has a table such as the one for Basingstoke here: 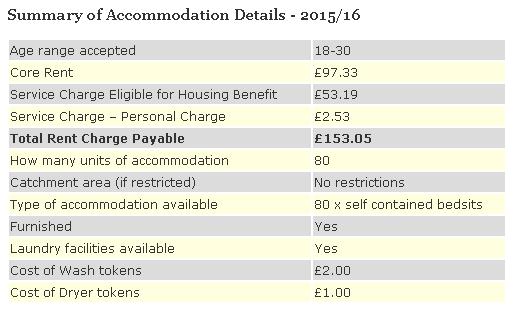 Note that the figures are in no way skewed to misrepresent as figures for YMCA Liverpool reveal a £677,000 per year cut for 98 bedspaces or £6,908 per bedspace and 50% higher than the above average.

In addition to the cautious £40 million housing benefit cut to YMCA England (and YMCA have homeless accommodation in Scotland and Wales too) it is reported that Housing & Care 21 will lose £23 million per year and Anchor will lose £13 million.

Other figures are trickling out individually and many are reluctant to state what their losses in housing benefit will be.

We first had a figure of £177 million per year from the NHF of 50,000 properties at £68 per week and then a day later a NHF figure of 156,000 supported and sheltered housing closures just for housing associations reported by John Healey in the House of Commons debate on Wednesday this week which if at the same £68 per week is £553 million per year…

…and the government is saying £35 million per year in DHP is appropriate!

That same HoC debate also had John Healey say that Mencap’s housing arm had shelved plans for a £100 million investment in new supported housing which shows the real issue of taking away the revenue funding, the HB which allows such services to operate and not only will services close, they will never reopen or be rebuilt.

Golden Lane Housing, Mencap’s housing arm, had plans for £100 million investment over the next five years in supported housing across England, but they have been scrapped.

Is it really the government intention to close ALL supported and sheltered housing services?  If the policy goes ahead in this planned form then every homeless hostel and every DV refuge will close by 2018.

There is no doubt that every DV refuge becomes non financially viable under the policy and also no doubt it will affect every women and child in every refuge on 4 April 2018 as all will have entered refuge after April 2016 and so all will receive the cuts and no DV provider can afford to operate a refuge.

What is truly bemusing is that this government knows the impact of this policy and has known the likely impacts since 2011 when they issued a consultation paper on this very same issue – capping housing benefit to the LHA rate.  That consultation did not even see a consultation response and the issue was dropped by the DWP, who are the same DWP personnel now as back in late 2011!

The House of Commons debate on Wednesday saw the CLG under which housing sits say they will defer the 1% planned rent cut for supported housing while awaiting a DWP study into housing benefit in supported housing.  Yet, the LHA maxima policy which holds the £40 million cut to YMCA England, is a housing benefit policy which comes under DWP and no deferment or even a commitment to look again at the issue, with or without this research study led by IPSOS MORI.

Instead all we have is a vague comment by Lord Freud in the House of Lords – and remembering Lord Freud was a full part of the original LHA maxima consultation in 2011 that was abandoned:

“I am not in a position to be utterly specific about how we will do this, but I can say that we will put in place the appropriate protections for those in supported housing. DWP (the Department for Work and Pensions) and DCLG (the Department for Communities and Local Government) will be working closely together to make sure that those protections are in place. We appreciate the concern, and we will aim to do this urgently.”

Lord Freud has had over 4 years to formulate “appropriate protections” since the July 2011 consultation yet has not done so. His definition of ‘urgent’ clearly finds no dictionary definition of that word.

The 2011 DWP consultation proposed 3 options of (a) LHA only (b) LHA + £20 and (c) LHA + £40 per week and was at pains to say this was not a cost cutting exercise but a recycling of existing funding on a cost neutral basis.  Yet as the above YMCA Basingstoke example shows what is now proposed is a cut of £82.35 per week as the current housing benefit is LHA + £82.35.  So even the most generous option from the 2011 consultation would see a cut of £42.35 per tenant per week if option (c) of LHA + £40 was implemented and a cut of £176,660 to YMCA Basingstoke that would still mean closure.

Some in supported housing are welcoming the statement of Lord Freud to look at this urgently and provide “appropriate protections” yet he has had over 4 years to develop these since the July 2011 consultation and has not done so.  That welcoming cannot be anything more than Panglossian delusion and supine or spineless delusion.  Lord Feud has had more than 4 years to find an ‘appropriate response’ yet has not done so and what the YMCA Basingstoke example above shows is no wriggle room and government has no option but to abandon the policy for all supported and sheltered housing.

Finally, the LHA maxima policy was announced out of the blue in the Autumn Statement on 25 November 2015 and was accompanied by the OBR estimates of savings which also included the certainty level of achieving the stated policy aims.

The OBR said the LHA maxima had a medium to high level of UNCERTAINTY in achieving its aims and its projected savings!

This policy is a dog with fleas and the government don’t have a Scooby Doo what they are doing. Abandon the policy

PS I had to somehow get this work of genius below into one blog post reader – just how can anyone see a map of Australia and think Scooby Doo?  Inspired just doesn’t cover it!

Damn, says Osborne…I would have gotten away with it if it wasn’t for you pesky bloggers?